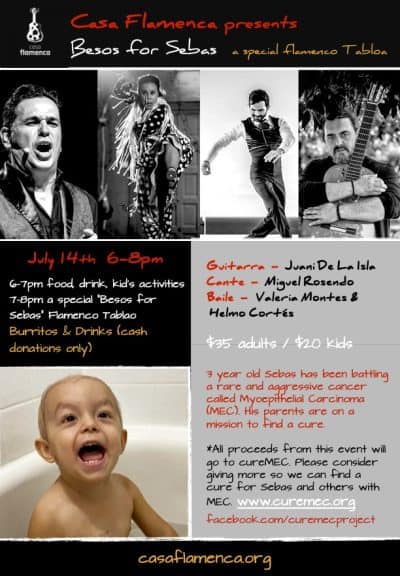 Casa Flamenca is proud to present our special “Besos for Sebas” Tablao al Aire fundraiser! All proceeds will go towards cureMEC, whose mission it is to ultimately find a cure for Myoepithelial Carcinoma (MEC), a rare form of cancer for which their currently is no cure or proven treatment,  that has afflicted one of our own Burqueño hijitos, Sebastian “Sebas” Natale Casaus. Please join us, Sebas, his parents Michael and Naomi, long-time Albuquerque activists, his brother Santiago, and friends and family who love them in a special event which includes kid’s activities (6-7 PM) and a special tablao (7-8). We will be joined by special guest artists-in-residence from Spain – internationally acclaimed flamenco guitarist Juani de La Isla, flamenco singer Miguel Rosendo and flamenco dancer Helmo Cortes. These artists have all performed internationally in flamenco festivals and touring productions with some of Spain’s finest flamenco artists. Also performing will be Casa Flamenca’s Artistic Director and dancer Valeria Montes. You can find more information about cureMEC and Sebas’ story at www.curemec.org.

Tickets: $35 for adults and $20 for kids, plus service fees. Feel free to give more “besos” in the form of an additional donation, as all proceeds will go to cureMEC!  Cash donations will be accepted for food and drink. Buy your tickets below.

CONCESSIONS: Cash donations will be accepted for food and drink.

*ALL OUTDOOR EVENTS ARE WEATHER PERMITTING – IF NECESSARY, PERFORMANCES WILL BE INDOORS* **Masks are encouraged.**