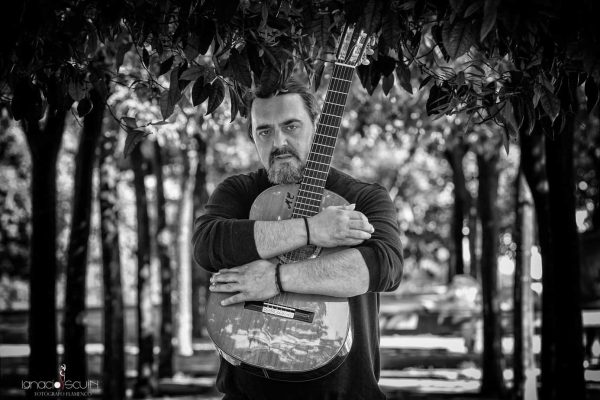 A highly respected flamenco guitarist from the island of San Fernando, near the port city of Cádiz in southern Spain, Juani de la Isla currently resides in Albuquerque where he is the Musical Director of Casa Flamenca. Juani studied with the great flamenco singer Rafael Romero and was a student of the celebrated flamenco guitarist Manolo Sanlúcar. He is trained in the gypsy flamenco style of Morón – a small pueblo in the heart of Andalusia’s flamenco country.

Juani has accompanied and composed for some of the greatest flamenco artists of this century including singers Jose Mercé, Chato de la Isla, Juan Villar, Rancapino, Pansequito, and Aguilar de Vejer; and dancers Javier Barón, Sara Baras and Manuela Carrasco. He has also appeared in over 300 albums and released his first solo CD, Libertad En Mis Manos (Freedom in My Hands) in 2015. As Musical Director for the popular flamenco singer El Barrio for over 10 years, Juani also composed music for the flamenco dance company of Cristina Hoyos and toured the United States with the flamenco dance ensemble La Chispa & Company. In 2018, he was a featured performer for the summer season of Tablao Verano de Casa Flamenca as part of Flamenco sin Fronteras, an artistic exchange project between the cities of Cádiz and Albuquerque.

The Juani De La Isla Quartet is a cross-cultural ensemble that explores the fusion of rhythmic and melodic junctures between Flamenco, Latin music and Latin jazz. The group features:

They will be joined by three celebrated flamenco artists:

The Quartet will present music from the Libertad en Mis Manos CD as well as Juani de La Isla’s new single Malucha, which was just released this May.