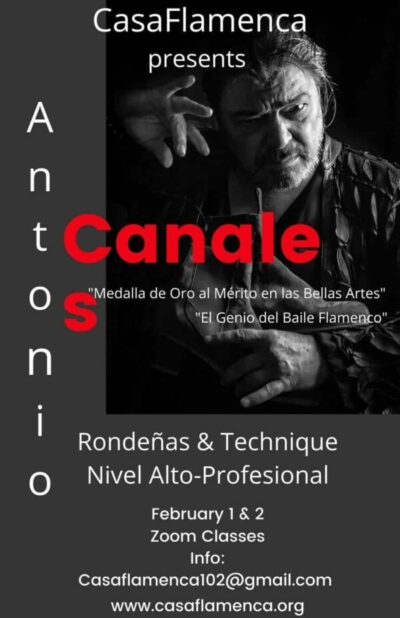 Casa Flamenca is excited to present Maestros del Flamenco. This online master class series is an initiative which will allow Casa Flamenca to continue presenting live flamenco despite the restrictions we are experiencing in the world today. Maestros del Flamenco consists of a weekly two-day series of online presentations featuring great masters of flamenco dance, guitar and cante. Support the arts by receiving art!

Our first Maestros del Flamenco Master Class of 2021 will be taught by Antonio Canales, one of Spain’s most internationally recognized dancers. This class will teach Rondeñas and Technique and is appropriate for skill levels Advanced through Professional.

Born Antonio Gómez de los Reyes in Seville, Antonio Canales is the son and grandson of flamenco artists. He began his career at the Spanish National Ballet, where he soon became the company’s solo dancer. He has starred as a guest artist with some of the world’s top companies, and achieved worldwide fame. He has shared the stage with figures of the category of Nureyev, Peter Schaufuss, Sylvie Guillem and Julio Bocca. In 1992, he set up his own company and appeared for the first time at the World Financial Center in New York to mark the Fifth Centenary of the Discovery of America. His show ‘Torero’ was nominated for an Emmy award in 1995. Most recently, Spain’s Ministry of Culture awarded him a 2020 Gold Medal of Merit for Fine Arts for promoting the culture and art of Spain with his profession.