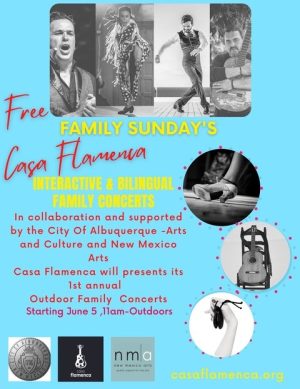 Casa Flamenca is thrilled to announce its 1st annual Family Sundays, in collaboration and partnership with the City of Albuquerque Arts and Culture and New Mexico Arts! Bring the whole family to this FREE outdoor flamenco concert series June – August. Experience interactive, bilingual, and exciting flamenco performances featuring special guest artists-in-residence from Spain: guitarist Juani de la Isla, singer Miguel Rosendo and dancer Helmo Cortés. Also featured will be Casa Flamenca’s own acclaimed dancer, Valeria Montes. This is a cultural and entertaining experience everyone in the family will love! Sundays are Fundays at Casa Flamenca!

Please RSVP FREE below so that we know how many to expect!