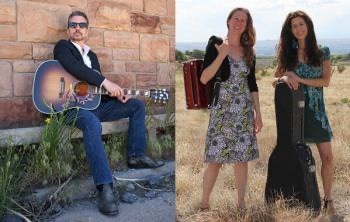 BUY TICKETS NOW! They are also available by phone through Hold My Ticket at 505-886-1251. Tickets cost $20 (including all service charges).

An award-winning indie Folk Americana Français duo hailing from Albuquerque, Bébé La La features singer-songwriter, guitarist, and violist Alicia Ultan and vocalist-accordionist Maryse Lapierre, who is originally from Quebec, Canada. Combining Lapierre’s French influences with Ultan’s original folk inspired “art” songs, Bébé La La boasts a unique and lovely repertoire that highlights their signature “stunning” harmonies. Over the years, they’ve developed a diverse and extensive repertoire, including Cajun and Greek tunes as well as new originals and they have performed throughout Albuquerque and surrounding areas, including at the Outpost Performance Space, the International Balloon Fiesta, several AMP Concert events, the Corrales Harvest Festival, the Balloon Museum, the Regional Arts Council of Truth or Consequences, NM and at many other venues.

Formed in 2010, the duo released their debut album, High Wire, in 2015, for which they received three nominations and two awards at the 2016 New Mexico Music Awards. Recorded at the multi-award winning Wall of Sound Studios in Albuquerque, the album comprises nine original songs by Ultan and one French ballad by Catherine Le Forestier. Bébé La La is currently recording their second (10th Anniversary!) CD, which they hoped to release in 2020, but in light of the pandemic, it looks like it will be the 10th anniversary release in their 11th year! Stay tuned, and for more information on that release, visit their website at Bebelalamusic.com. Featured on that CD, with drummer Arnaldo Acosta and bassist Mike Fox as well as some special guests, will be eight original tunes by Ultan and a new original French tune by Lapierre. For this concert at Casa Flamenca, Alicia and Maryse will be joined by Micky Patten on bass and Cal Haines on drums.